The Battle Belongs to the Lord . . . by Andrea R Huelsenbeck 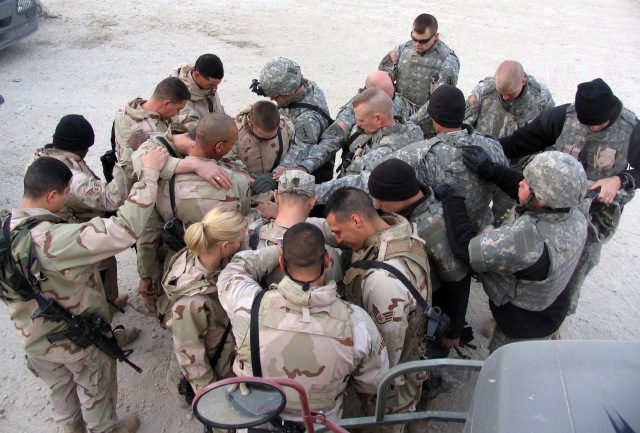 I’m repulsed by news of terrorist attacks—bloodthirsty zealots torturing, beheading, or blowing up human beings who do not embrace their worldview. Whenever I think of our world’s volatile condition, two verses of Scripture come to my mind: “For our struggle is not against flesh and blood, but against the rulers, against the authorities, against the powers of this dark world and against the spiritual forces of evil in the heavenly realms.” (Ephesians 6:12 niv) (Note: “rulers,” “authorities,” and “powers” in the above passage refer to ranks of fallen angels.) And: “But this kind [of demon] does not go out except by prayer and fasting.” (Matthew 17:28b amp)

Our enemies in the war against terrorism aren’t the sympathizers of a particular organization—it goes much deeper than that. While the terrorists perpetrate evil, they rationalize that they are doing their god’s will. They call it a holy war, but they are deceived. The inner voice they heed belongs to Satan, disguising himself as a god. He attempts to overthrow God; his strategy is to kill until his own followers dominate the earth. It is not a holy war, but it is spiritual warfare. Our true enemies are Satan and his demons.

Americans differ on how to combat terrorism. Are U.S. bombing missions and advisory personnel sufficient, combined with troops from the affected regions? Or must we have thousands of American boots on the ground?

I don’t know how much money or personnel would be required to eradicate the terrorists, but we won’t win unless we use the appropriate weapons on the correct battlefield. Since this war is also playing out in the spiritual realm, in addition to conventional weapons, we need prayer warriors all over the world.

Throughout history, God has given military victory to His people on the basis of their trust in Him. There are many examples documented in the Bible. I will summarize a few of them.

The parting of the sea. While Moses led the exodus from Egypt (Exodus 14:5-30), Pharaoh reconsidered his release of the Israelites and took his troops to recapture them. Trapped on the shore of the sea, the Israelites panicked and questioned Moses regarding his leadership.

Moses answered the people, “Do not be afraid. Stand firm and you will see the deliverance the Lord will bring you today. The Egyptians you see today you will never see again. The Lord will fight for you; you need only to be still.” (Exodus 14:13-14 niv)

God, through Moses, divided the waters so that the people could cross to the other side on dry land, while the Egyptians followed close behind. Then the wheels fell off the Egyptian chariots, and they had trouble catching up. When all 600,000 Israelites were safely on the opposite shore, God then led Moses to make the waters come together again, and all the pursuing Egyptian troops drowned.

Forty years later, when the Israelites were poised to take possession of the Promised Land, Moses gave them guidelines for conducting warfare (Deuteronomy 20). The first thing he told them was, “When you go to war against your enemies and see horses and chariots and an army greater than yours, do not be afraid of them, because the Lord your God, who brought you up out of Egypt, will be with you.” (Deuteronomy 20:1 niv)

God is with His people in spiritual warfare as well.

The fall of Jericho. For centuries, cities were surrounded by walls that served as the first layer of defense against attacks. Before the battle of Jericho, God gave Joshua some incomprehensible military strategy.

Then the Lord said to Joshua, “See, I have delivered Jericho into your hands, along with its king and its fighting men. March around the city once with all the armed men. Do this for six days. Have seven priests carry trumpets of rams’ horn in front of the ark. On the seventh day, march around the city seven times, with the priests blowing the trumpets. When you hear them sound a long blast on the trumpets, have all the people give a loud shout; then the wall of the city will collapse and the people will go up, every man straight in.” (Joshua 5:2-5 niv)

Imagine the people of Jericho watching the Israelites with amusement from the safety of the wall for the first six days, and how surprised they must have been on the seventh day, when the wall crumbled and the Israelite warriors flooded into the city.

Gideon defeats the Midianites. In the book of Judges, chapters 6 and 7 describe conflict between the Israelites and the Midianites, who for seven years attacked the Israelites, destroying their crops and killing all their livestock. Finally, the Israelites cried out to the Lord for help. The angel of the Lord appeared to a farmer named Gideon. “The Lord turned to him and said, ‘Go in the strength you have and save Israel out of Midian’s hand. Am I not sending you?’ ” (Judges 6:14 niv)

To Gideon it seemed far-fetched that he was being commanded to lead the Israelite troops into battle. He went through an elaborate series of measures to confirm his orders.

Finally, Gideon gathered his troops, 32,000 men. “The Lord said to Gideon, ‘You have too many men for me to deliver Midian into their hands.’ ” (Judges 7:2a niv) God whittled down the forces until only 300 men remained. He wanted to make it clear to Israel that they would defeat Midian because He was with them, not because of their own power. And defeat them they did.

In a nutshell, God prompted Gideon to give each man a jar, a torch, and a trumpet. When they reached the edge of the Midianite camp, they blew their trumpets and shouted, “For the Lord and for Gideon.” Then they smashed their jars, blew their trumpets, and shouted again. As they stood and watched, their terrified enemies ran around in a panic, drew their swords, and attacked each other.

The Philistines were threatening the Israelites. Every day, their fiercest warrior, Goliath, who was over nine feet tall, challenged the Israelites to send over a warrior to battle him, one-on-one. No one volunteered.

On the fortieth day, a shepherd boy named David came to the Israelite camp, bringing food for his brothers. He heard Goliath’s challenge and told King Saul, “I can take him.”

When Saul told him he was too young and inexperienced, David, who he had successfully defended his father’s sheep from a lion and a bear, said, “The Lord who delivered me from the paw of the lion and the paw of the bear will deliver me from the hand of this Philistine.” He refused King Saul’s offer of armor and sword, preferring the simple weapon he was familiar with—his sling. As he approached Goliath,

David said to the Philistine, “You come against me with sword and spear and javelin, but I come against you in the name of the Lord Almighty, the God of the armies of Israel, whom you have defied. This day the Lord will hand you over to me, and I’ll strike you down and cut off your head. Today I will give the carcasses of the Philistine army to the birds of the air and the beasts of the earth, and the whole world will know that there is a God in Israel. All those gathered here will know that it is not by sword or spear that the Lord saves; for the battle is the Lord’s, and he will give all of you into our hands.” (1 Samuel 17:45-47 niv)

Then he swung his sling and killed the giant with one stone. The Philistines ran away with the Israelite army pursuing them.

Throughout the Bible there are numerous occasions when commanders inquired of the Lord before going into battle. When the leaders and the people prayed, acted in obedience to God’s leading, and acknowledged that God WAS leading, success followed.

Armageddon. Many people look at the current world situation and wonder if World War III is about to begin, or even the end times. Certainly we are experiencing “wars and rumors of wars” and natural disasters, but those conditions are standard on earth. People have anticipated the last days for 2000 years. Martin Luther was sure Jesus would return during his lifetime (1483-1546). Jesus himself admitted, “No one knows about that day or hour, not even the angels in heaven, nor the Son, but only the Father.” (Mark 13:32 niv) But it’s hard to look at our world and not wonder if we are seeing the beginning of the end.

In the book of Revelation, Scripture describes the assembling of armed forces at Armageddon (Revelation 16:12-21; 19:11-21). But instead of a battle, what follows is total destruction and judgment—thunder and lightning, the granddaddy of all earthquakes, the sinking of islands and the crumbling of mountains, hundred-pound hailstones, and the Beast and the False Prophet thrown into a Lake of Fire. No need to fight—the spiritual battle was already won by Jesus dying on the cross and rising from the dead.

In light of this scriptural evidence, how can we respond to the threat of terrorism? Our military needs highly skilled warriors and gifted support personnel. Some will serve, but all of us can contribute by praying, because this battle is truly the Lord’s.

How should we pray? Prayer is conversation with God. Imagine yourself at the foot of His throne. Say “Hi.” Acknowlege His sovereignty; ask for forgiveness; thank Him for His blessings. Then make your requests. Here are some suggestions:

Repeat daily until you see results.

10 Responses to The Battle Belongs to the Lord . . . by Andrea R Huelsenbeck