“What Do We Do with That?” by Donna Clark Goodrich

I have a friend who is a hoarder. Her bed is covered to the point she barely has room to crawl in at night. She told me recently that she has been throwing away motel receipts from the 80s (“in case they come back and say we didn’t pay”), store receipts (“I might want to take something back”)—35 years ago? She refuses to throw things away because “I’m going to use it someday.” (She’s 84 and legally blind.) 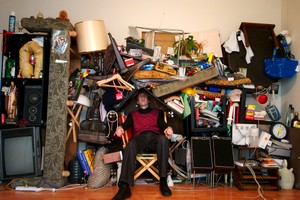 My friend shared that one day her daughter looked around their house and asked, “Mom, when you and Dad die, what happens to all this stuff?” My friend replied, “Honey, one day all this will be yours.” She said the look on her daughter’s face was not one of joy.

I determined I wasn’t going to put a burden like that on our children so after my husband passed away seven months ago, I’ve begun a thorough cleansing of every room including:

Cookbooks. For someone who doesn’t cook much (do TV dinners count as cooking?), I had an enormous stack of cookbooks. I went through them, photocopied those recipes I knew I would (or could) make, and put them into a notebook separated by categories, then I gave the rest away to friends who were more culinary minded.

Plastic containers. I had myriad plastic containers of every shape and size and every time I opened the cupboard door, out they fell. I donated all of them to our church kitchen and bought a set of seven stackable ones with the lids fitted neatly inside. I’ve kept a few store containers to send food home with our kids, containers they knew they didn’t have to return.

Silverware. I had a whole drawer full of silverware, plus a good set in the closet. I donated the everyday ones to a woman’s shelter and I’m using the good ones every day.

Towels. The same with towels. I had three sets I used just for company. Now I’m using them every day. If company comes, I’ll still put them out. Why not? They’re clean!

Bibles. Since I do a lot of proofreading and editing, I had just about every version of the Bible ever printed. I gave most of these to my pastor son-in-law and kept only the three I use most often. The others I can find on Bible Gateway.

Songbooks. I had two shelves full of songbooks, many containing the same songs. I went through a bunch of them, photocopied favorite songs, and put them in alphabetical order in a notebook. I then sent a box full of the others to my songwriting nephew.

Novels. I had several shelves of unread novels. In the past few months of grieving, when I didn’t have the energy to do much else, I began reading these books, then gave them away as I seldom read a novel more than once. However, I have kept sets written by favorite authors.

Slides. At one time I had 57 trays of slides; now I’m down to 10! I threw away literally hundreds of nothing but scenery (I had never seen a mountain until our trip to Arizona, and how many pictures of heather in Scotland can you keep?). I also had photos of dozens of birthday parties with children that I babysat over 40 years ago. I kept one of each child and disposed of the rest. Then I typed up two index sheets for the remaining 10 trays and put one sheet in the tray and the other in a notebook.

Magazines. To help dispel my Matterhorn of piled magazines, I canceled my subscriptions to several (never mind that they had a great offer of only $8 for two). When they come in the mail, the first thing I do is tear out all the ads (about 1/3 of the magazine). If I can’t read them within a few days, I put them in a bag and take them to the doctor’s office or other places where I have to wait. When I finish, I leave them there for others to enjoy.

Newspapers. I’m a newspaper addict, but as soon as I read each day’s, it goes in a plastic bag and I take a little walk down to the corner recyclable Dumpster.

Yearbooks. I called the alumni offices of my high school and my husband’s college and found that they are glad to receive old yearbooks as they still get requests for them, so I’m tearing out the pages with all the great things people wrote about us, and will send them on. (You can see most yearbooks online now anyway.)

The three things I haven’t gotten to yet are 1) photographs (I have them in albums up to 1974; the others are in manila envelopes, divided by year); CDs and videos/DVS. (I have more than I’ll have time to listen to or watch in a lifetime.

Hopefully, after all this sorting and tossing, when my kids have said their final good-bye to me and come to clean out my house, they won’t shake their heads in despair, look at each other, and say, “What do we do with that?”

Donna Clark Goodrich, Mesa, Arizona, is a speaker and author of 24 books and over 700 published manuscripts. She and her husband Gary have 1 son, 2 daughters, a pastor son-in-law, and 2 granddaughters. A freelance proofreader/editor and speaker, she enjoys writing devotionals, self-help books, and personal experience articles. Her latest books are A Step in the Write Direction—the Complete How-to Book for Christian Writers, The Freedom of Letting Go, and a joke book, The Little Book of Big Laughs. A children’s picture book Rhyme Time Stories for Little Ones will be released in February 2016 from Harvest House. Contact her at dgood648@aol.com or www.thewritersfriend.net. She also blogs every Monday at: http://donna-goodrich.blogspot.com
View all posts by dgood648 →
This entry was posted in Decluttering, Doing Life Together, Family Life, Finding solutions, Life Transitions, Uncategorized, Widowhood and tagged Organization. Bookmark the permalink.

6 Responses to “What Do We Do with That?” by Donna Clark Goodrich