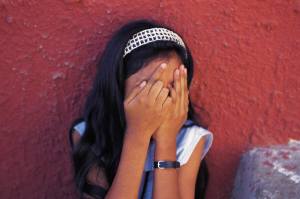 I remember my children crying from time to time because another child said something either to them or about them that hurt their feelings. Maybe it was simple name calling, or some accusation that was made. It’s one of the things that pulls a mama’s heartstrings the most. How do you handle your child’s crisis?

I used one simple question to get to the heart of the matter. I’d hold them close as they told me what happened and what had been said. Then, wiping away their tears, I’d ask, “Is it true?” Usually the answer was no, so I’d tell them, “Then it doesn’t matter what they said. You and I know it isn’t true. God knows it isn’t true. Now you just have to live in a way that proves it.”

Occasionally, in answer to my question, they’d say yes, what they’d been hurt by was true. Or maybe it was partly true or a misunderstanding. This is a great teaching moment. An apology may be in order, or a change in the way they treat someone. Whatever the situation calls for, assure your child that everyone makes mistakes. Then help him figure out what is the right thing to do. Encourage him to do it and perhaps even offer to go with them for moral support.

Lastly, I’d remind my child that the person who hurt him needs his prayers. Jesus said to “pray for those who persecute you” (Matt. 5:44). Maybe the other child is hurting in some way himself. It’s hard to stay mad at someone you’re praying for. It helps in the forgiveness process. My kids had answers to prayer that were nothing short of miraculous when we prayed for children who hurt their feelings.

Teaching your child to respond with kindness and prayer, rather than retaliation, goes a long way in helping him get along with difficult people. It doesn’t mean he has to put up with ill treatment, but it teaches him forbearance and self control, which will serve him well as he grows into adulthood.

How do you handle your child’s hurt feelings?