In a doctor’s office waiting room, a serene young mother interacts with her approximately one-year-old daughter. The toddler walks back and forth between her mom and other enticing areas of the room, examining toys, scrambling up on an empty chair. The little one frequently looks back at her mom, whose eyes are always ready to meet hers. The mom offers the little girl an apple, which she eagerly accepts. Clearly, this mother loves and nurtures her child.

But one thing is oddly missing. During the ten minutes I observe, neither mother nor child utters a word.

I think back to the days when I was the stay-at-home mom with the toddlers in the waiting room, days characterized by noise and chaos. By the age of twelve months, my kids were stringing words together. They processed the world verbally with delighted squeals and enthusiastic exclamations, naming everything they encountered, and expecting me to participate in the conversation. They were anything but silent. Keeping them quiet during a Sunday sermon was next to impossible. 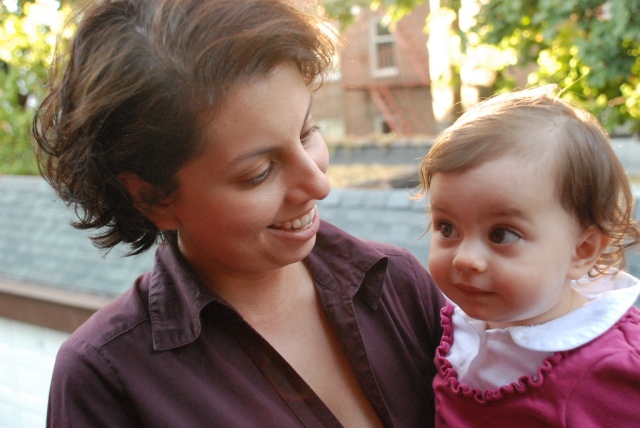 Frankly, I was envious of this peaceful mother. Maybe I made my life, and the lives of all the people around me, a lot less pleasant with all the talking I did with my babies. I thought I was doing the right thing. Maybe I screwed up.

Research shows that speaking to children from birth (and even before) positively impacts their language development, their success in school, and even their future earning power. 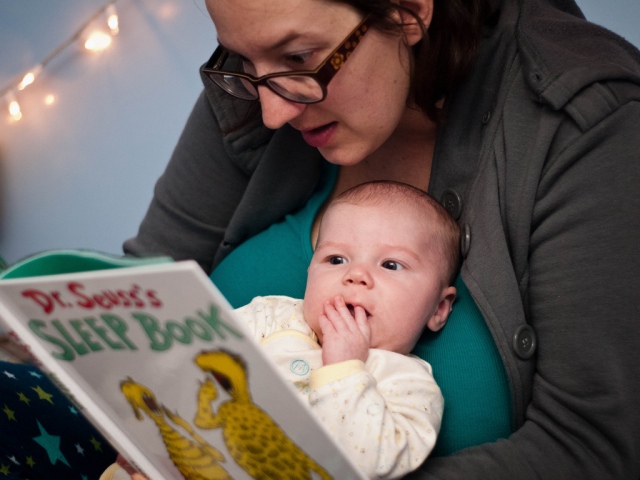 In a 1995 book Meaningful Differences in the Everyday Experiences of Young American Children, researchers Betty Hart and Todd R. Risley determined in a sample study that children whose families were on welfare heard about 600 words an hour spoken by their parents and/or caretakers. Working class children heard 1,200 words per hour, and children from professional families heard 2,100 words. The greater the number of words children heard from their parents or caretakers before they were 3, the higher their IQ and the better they did in school. But it needed to be words directed to them, as in conversation or a read-aloud story. Words on TV or on a video didn’t contribute to the effect; if anything, they subtracted from it.

Parents who work full-time may feel discouraged about squeezing in another thing-to-do in relation to raising their children. Who has the time or energy to think of  thousands of words to say to their kiddos every day? But it’s a simply a matter of using time together to best advantage–while riding in the car, while running errands, during “down time” before bed. In Chicago, the Thirty Million Words Project teaches parents how to talk to their babies. I love how this young mother takes cues from her little daughter, embellishing on her comments and taking the conversation one step deeper:

And in Providence RI, a similar initiative is offered to families.

Would you give the gift of yourself to your child, if it meant better brain development? Time spent in infancy could eliminate the need for costly tutoring later.  The side benefit of this kind of interaction is the deep bond it fosters. The flip side, as Hart and Risley’s study determined, is that children’s level of language starts to level off when it matches that of their parents, which means language deficiency is passed down through generations. (Do you ever wonder why some children who grew up in poverty become successful innovators as adults? Maybe it was something as simple as a parent, grandparent, or caretaker who consistently spoke to them.)

If my own experience is any indication of the success of this strategy, my very verbal brood were all reading by the time they entered kindergarten. Four of the five were selected for their district’s gifted program in elementary school. Three of them have bachelors degrees, one has an AA, and the first child (overachiever) has two Masters and is finishing her Ph.D.

Would you like to buy a word-counting device like the one shown to use at your home? Versame manufactures one.

So, what do you think? If you have little ones at home, do you (or will you) keep a running conversation going? Will you read them stories every night (and before nap time, too, if you’re at home)? Can you think of any reason not to?

Andrea R Huelsenbeck is a wife, a mother of five and a former elementary general music teacher. A freelance writer in the 1990s, her nonfiction articles and book reviews appeared in Raising Arizona Kids, Christian Library Journal, and other publications. She is currently working on a young adult mystical fantasy novel and a mystery.
View all posts by Andrea R Huelsenbeck →
This entry was posted in Babies, Brain research, Doing Life Together, Grandparenting, Life, Love, Parenting and tagged children, Doing Life Together, sharing life, Speaking to babies, Teaching babies language. Bookmark the permalink.

4 Responses to The Sweetest Sound