What’s in a Name? by ARHuelsenbeck

Most parents agonize over what to name their precious babies. They recognize names are an important part of our identities. Your name influences others’ perceptions of you.

As a child, I hated my name. It was too different. Most girls I knew had some variation of Mary in their names: Mary Clare, Mary Beth, Marianne, Mary Lou. My parents named me Andrea, after my father (Andreas). My middle name is Gabriela, after my father’s aunt (a Benedictine nun named Sister Gabriela).

During elementary school, I tried to train people to pronounce my name On-dray-ah. Instead, they reverted to Ann-dree-uh. When they remembered my name. Often, they called me Angela, Audrey, Adrienne. I learned to answer to any name that started with A.

In high school, desperate for a nickname, I introduced myself as Andie. People who met me between 1966 and 1973 still call me that. I dropped Andie when I married, because my husband, Greg, refused to use it. (That’s okay—I call him Gregory when I’m mad at him.)

We took care in selecting meaningful names for our children (not an easy feat when your last name is Huelsenbeck—what sounds good with Huelsenbeck?):

I think each of the kids has gone through a time they were embarrassed by their names. I told them when they were 21 they could get their names changed legally. (So far, nobody’s done it.)

When Matt was eleven, he was diagnosed with juvenile diabetes, and we joined a support group. As we walked into the meeting room, we filled out name tag stickers, and I went to talk with some of the moms while Matt hung out with the other kids. A mother asked me which child was mine, and I said, “The tall one with the blond hair.”

Yep. There was Matt, wearing a name tag that said Spencer. 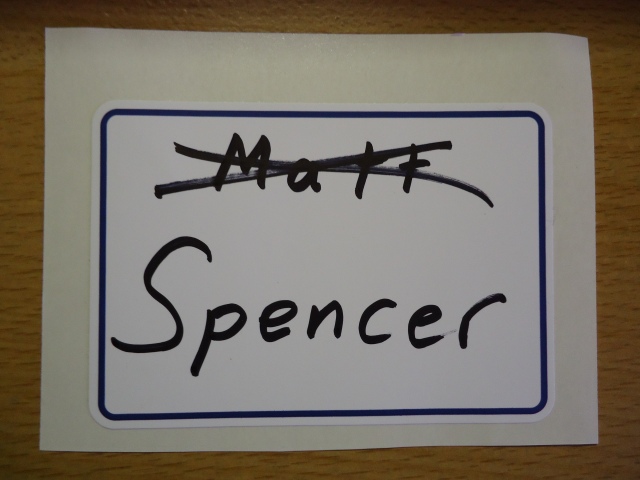 When Andy was in middle school and high school (back in the days before we had cell phones), we often got phone calls for Diesel. Greg would say, “You have the wrong number,” and hang up. But actually, Diesel was Andy’s alter ego.

I remember as a teenager, I fantasized naming my daughters Cassandra and Vanessa. I chickened out when the time came.

We had a lot of back-up names picked out. Carly would have been Michael if she had been a boy. Katie would have been Alex. We used to joke that if we had four boys, they’d be John, Paul, George, and Ringo, or Matthew, Mark, Luke, and John. At one time I wanted to name four girls Kathryn, Lauryn, Eryn, and Jaclyn.

I think we did a decent job of naming our kids.

Maybe we did better than a lot of parents. Sometimes I wonder what thought process people employ when they name their kids. Do they just cut letters out of the newspaper and put them together any which way? What were they thinking when they named their babies Dweezil or Apple, Draven or Moo, Suri or Lyric or Major? I had a student whose name was Z. That’s right, just the letter Z.

Andrea R Huelsenbeck is a wife, a mother of five and a former elementary general music teacher. A freelance writer in the 1990s, her nonfiction articles and book reviews appeared in Raising Arizona Kids, Christian Library Journal, and other publications. She is currently working on a young adult mystical fantasy novel and a mystery.
View all posts by Andrea R Huelsenbeck →
This entry was posted in Family Stories, Humor, Parenting and tagged Baby names, Doing Life Together, Naming children. Bookmark the permalink.

9 Responses to What’s in a Name? by ARHuelsenbeck