All five of my children knew how to read by the time they entered kindergarten.

Are they incredibly brilliant? Yes. But more than anything else, I attribute their early grasp of a complicated but vital skill to the fact that my husband and I read to our children from the time they were babies.

At what age should I introduce my baby to books?

Somewhere from three to five months, while holding the baby in your lap, page through a board book with him. He will try to wrest it from your hands and put it into his mouth. That’s what babies do—they explore the world with their taste buds and their sensitive tongues. Let him have it, and gently try to draw his attention to the pictures.

This step is a lot easier if you have already been showing him things in his environment and naming them. “Oh, there’s Garfield. Isn’t he a fluffy kitty?” Talking to little ones from the day they’re born and verbally labeling things helps babies grasp that words have meanings. It’s also essential to language acquisition.

Even so, the baby will probably not begin to zero in on the pictures until at least age six months or so. And then, her focus will only last a few seconds before she tries to eat the book again.

Start out with books that have very few words. When your baby starts paying attention to the pictures, either read the words or talk about the pictures. 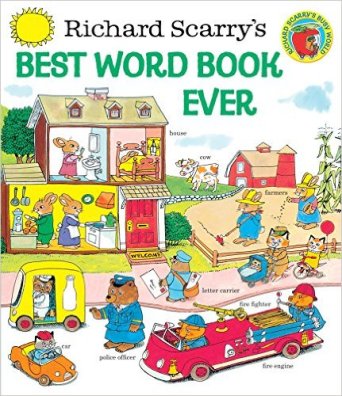 When can I start reading my child real storybooks?

Around twelve months, your child is learning words and less likely to stuff books into his mouth. It’s the perfect time to start actually reading to him (though some children are ready even earlier). Take into consideration that his attention span is really short—be sure you’re turning pages at least every 30 seconds, even if it means not reading all the words on the page yet.

The best early books don’t have much plot. Instead, they have lots of pictures. When my own children were little, I loved Dr. Seuss’s ABC and Richard Scarry’s Best Word Book Ever. Read the ABC book (and any rhyming or story book) with expression. Lively renditions will help your little one remember the words, which will come in handy later as he starts trying to read.

Speaking of rhymes, don’t overlook Mother Goose. The meter and rhythm of nursery rhymes create spoken music and ingrain themselves into children’s memories. When I taught elementary music, we often used Mother Goose rhymes for musical exploration. It was heartbreaking to discover that many students were unfamiliar with them. Back in the day, children memorized a whole repertoire of nursery rhymes before they entered kindergarten, just from their parents reading them aloud over and over again.

Work reading into the child’s routine. We read to the kids at naptime and at bedtime, often for a half-hour or more. Sometimes we read to a bunch of the kids altogether, and sometimes we read to each one individually. (One-on-one is my preference. I had the luxury of being a full-time mom to five children. Tailor your reading time to fit your own obligations.) Story time deepened our bonding. We cuddled, kissed, laughed, and discussed the silly and the profound.

How does reading to my children help them become readers?

Having story time places value on reading, especially if your children also see you reading newspapers, magazines, books, and e-readers.

Also, if you track the words with your finger, your child will unconsciously pick up the left-to-right, top-to-bottom orientation of Western written language.

Little by little, you can teach your children the letters of the alphabet, the building blocks of words. The ABC book and Sesame Street will reinforce what you do.

Start with the first letter of the child’s name. Point it out a couple of times a day, especially whenever you see it in a bold form, like on a sign or a license plate. You can run your finger along the shape of the character and say, “Look—C for Carly.” Pretty soon, your child will be pointing them out as well. Then add M for Mommy or D for Daddy. Pace yourself—don’t overwhelm them. But if you are persistent, over the course of a year, they will learn to recognize all the letters.

I am a phonics enthusiast. After my kids knew their letters, I began telling them about their sounds. “M says mmmmmmm.” And I taught only one sound at a time.

After they knew most of the sounds, I began teaching them how to sound out words. I would point to the word milk on the gallon jug, and sound it out slowly, running my finger under each letter. Soon, they would find the word milk in stories we were reading, and sound it out for me. We did the same for other common words. As the months went by, the kids developed a strategy for figuring out words they didn’t recognize.

We bought our first house when Carly was two and a half. One day in a furniture store where we were shopping for furniture for the new house, Carly asked, “What does d-e-p-t spell?”

I answered, “That’s a short way of writing department.”

“Oh,” she said. “That sign says, No Smoking by Order of Fire Department.”

Yes. Two and a half years old. Was she unusually bright? Yes, but it didn’t take her siblings much longer to be able to read like that. It was exposure to words and to the secrets of deciphering that enabled them to learn to read at an early age.

Once your child begins to read, you can take turns reading pages during story time. 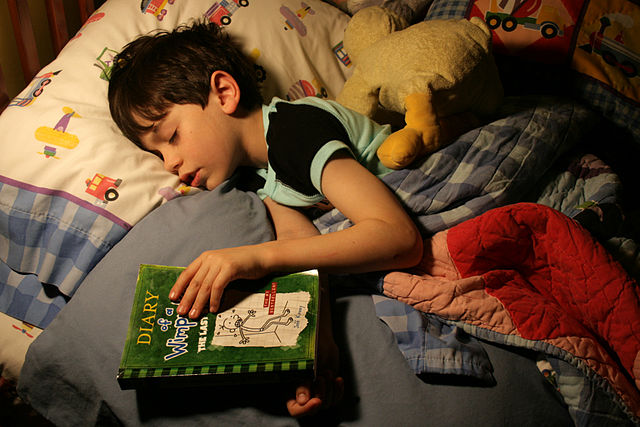 How long do I have to keep this up?

There will come a day when your child will discover she can read silently. Pretty soon, she will be able to read faster than you can read aloud, and you reading to her will be an occasional treat instead of an everyday occurrence. (And they might want to take over story time for their younger siblings, at least sometimes.) For my children, this happened when they were five or six.

Are you willing to spend five or six years getting your children ready to read? Did you have a different experience reading to your children? Share in the comments below.

Andrea R Huelsenbeck is a wife, a mother of five and a former elementary general music teacher. A freelance writer in the 1990s, her nonfiction articles and book reviews appeared in Raising Arizona Kids, Christian Library Journal, and other publications. She is currently working on a young adult mystical fantasy novel and a mystery.
View all posts by Andrea R Huelsenbeck →
This entry was posted in Babies, Books, Family Life, Learning New Skills, Parenting, Reading and tagged Reading to babies, Story time. Bookmark the permalink.