My parents were immigrants from Germany. My mother’s sister married an American G.I. after World War II, and she and her husband sponsored my parents’ entry into the United States. I was conceived in Germany but born in the United States.

After my parents became American citizens, they sponsored my mother’s cousin’s family to come over from Germany. I knew her as Aunt Lizi and her husband as Onkel Willi. Their three children were Volkmar, Claus, and Gudrun. My dad helped Onkel Willi (a professional baker) get a job in the bakery where he worked. The family lived with us for a short time. I don’t remember that because I was so young, but Claus told me years later he remembered watching Hopalong Cassidy on television with me.

My mother and Aunt Lizi had many fallings out. Some years they wouldn’t even speak. But then they’d forgive each other and start visiting each other again. I have memories of lots of fun times together at their house or ours.

Toward the end of junior year in high school, I wanted a real job to save money for college, something other than babysitting (although I continued to babysit through college). My dad talked to Uncle Willi, who now owned a bakery two towns away. He hired me to work in his store. I wore a white uniform and waited on customers. I sliced bread, filled jelly donuts and eclairs, and eventually frosted and decorated cakes.

My school let out early enough that, even with taking the bus to the bakery, I got there before the nearby Catholic high school released for the day. Many of the students (some of whom had been my classmates in elementary school) stopped in to buy a brownie or a giant cookie before they returned home—the after-school rush. (I enjoyed a certain status by working at a place that was popular with teenagers.) I also worked on the weekends. Sunday morning was another busy time, with parishioners buying crumb buns, cinnamon raisin buns, and hard rolls for breakfast after Mass. 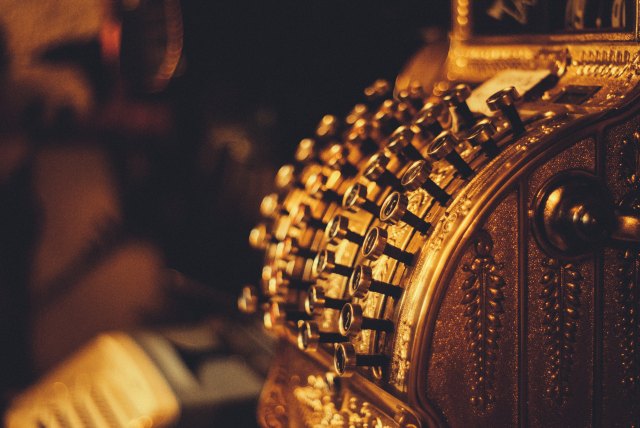 One of Onkel Willi’s little quirks was that he left the drawer of the cash register open when he closed the store for the night. He wanted to be sure that if a burglar broke in, he wouldn’t destroy the cash register trying to get into it. (Cash registers were expensive.) He left about forty dollars in the machine, reasoning that any less, and the burglar might vandalize the store. He figured forty dollars was the threshold at which the burglar would just take the money and leave. (We’re talking 1969. Forty bucks was a fair chunk of change in those days.)

I worked at the bakery until I left for college. When I came home the first summer, I found a new job at a local dry cleaner, because I wanted a position won completely on my own merits, without my dad’s help.

But I always remember with fondness my very first job at the bakery, where the fragrances of vanilla, butter, yeast, and cinnamon greeted me as I passed through the portal.

What was your first job? Was it a good experience? Share in the comments below.

Andrea R Huelsenbeck is a wife, a mother of five and a former elementary general music teacher. A freelance writer in the 1990s, her nonfiction articles and book reviews appeared in Raising Arizona Kids, Christian Library Journal, and other publications. She is currently working on a young adult mystical fantasy novel and a mystery.
View all posts by Andrea R Huelsenbeck →
This entry was posted in Memoir and tagged First job, Working. Bookmark the permalink.