I always wear shoes in my house.

I live in the Arizona desert.

I actually live in a lovely urban/suburban area outside Phoenix. But, technically, it’s a desert.

Because it’s rather densely developed, we don’t have some of the wildlife Arizona’s famous for, like javelinas, Gila monsters, and rattlesnakes. When we first moved here, there was a roadrunner in our neighborhood, but he eventually disappeared. 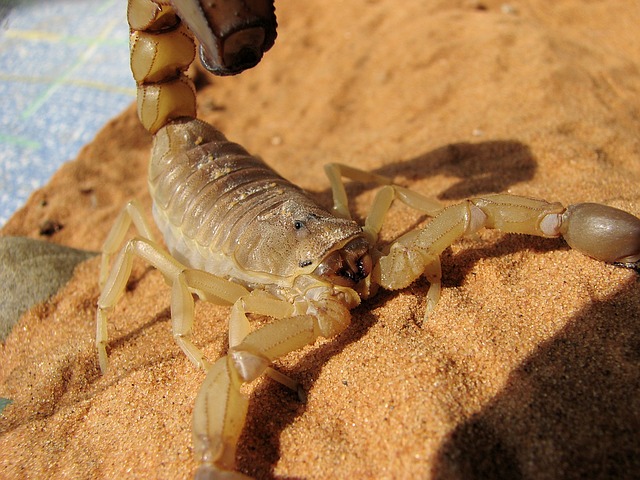 However, thar be scorpions. And occasionally they come inside. We see one four or five times a year in our house—climbing up the dishwasher, strolling down the hallway, blending into the carpet… My husband and our five children have all been stung. So far I’ve not had the pleasure.

Shoes and clothing lying on the floor are favorite hiding places for scorpions. One daughter put on her jeans and got stung on her butt.

After one of our children was stung, she said, “I’ll never worry about getting stung again.” Our common scorpions here are not deadly. The stings hurt initially, but soon the affected body part turns numb, which lasts for a few days.

Friends who moved here before us told of going out scorpion hunting at night (when they’re most active) with blacklights. The lights cause the scorpions to glow, making them easy to see in the dark. Frankly, they’re crunchy. Just whack them once or twice, and they’re history. We keep a couple of flyswatters hanging on nails in the kitchen and the hall by the bedrooms. I’m our family’s prime scorpion executioner.

I’ve heard that if you hit a pregnant scorpion, you’ll release her many offspring, although I tried Googling that, and I didn’t find any articles to support that theory. (Apparently, it’s true of wolf spiders, though.) Mother scorpions do carry their young on their backs for 22 days, so if you try to whack one of them, you’ll have to be certain you get them all.

Raid didn’t even slow this scorpion down. (Note: Raid does not claim to be effective against scorpions.)

Sprayed pesticides have limited effect on scorpions because their bodies don’t touch the surface of the ground. One way to decrease your scorpion population is to address their food source. Do you hear crickets? Better put down some cricket crystals, because scorpions consider crickets gourmet delicacies.

Andrea R Huelsenbeck is a wife, a mother of five and a former elementary general music teacher. A freelance writer in the 1990s, her nonfiction articles and book reviews appeared in Raising Arizona Kids, Christian Library Journal, and other publications. She is currently working on a young adult mystical fantasy novel and a mystery.
View all posts by Andrea R Huelsenbeck →
This entry was posted in Doing Life Together, Uncategorized and tagged Scorpions. Bookmark the permalink.